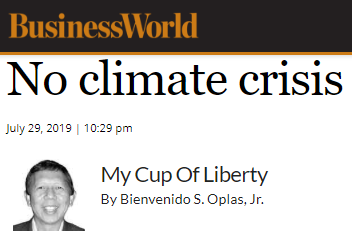 WASHINGTON, DC — The various presentations at the Heartland Institute’s 13th International Conference on Climate Change (ICCC-13) on July 25 in this city reiterated what many scientific papers from the fields of meteorology, geology, climatology, physics, chemistry, biology, mathematics, etc. have found — there is no climate crisis or climate emergency.

Global warming is true, climate change is true, but they are largely natural, nature-made and not man-made (or anthropogenic), and cyclical. What is termed and called by others as “extreme weather” has no baseline period as basis of comparison. So when asked, “extreme weather compared to when, 200 or 800 or 10,000 or 10 million years ago?” the answer is often the sound of silence.

The fact is that there was “extreme weather” during the Roman warm period, Medieval warm period, until the current modern warm period, and in the next hundreds and thousands of years into the future.

Dr. Roy Spencer, a climatologist at University of Alabama in Huntsville (UAH) observed that the Coupled Model Intercomparison Project (CMIP) of the World Climate Research Program (WCRP) models are “warming about twice as fast as both UAH satellite temperatures and the average of four global reanalysis datasets. And even if observed warming is due to increasing CO2, it is too weak to notice in our lifetime.”

Dr. Nir Shavi, a physicists at the Hebrew University of Jerusalem, argued that “actual evidence points to a strong solar climate link and a low climate sensitivity, future warming will be benign, and that solar activity should be taken but it is ignored by the UN IPCC (United Nations Intergovernmental Panel on Climate Change).”

Dr. Jay Lehr, a hydrologist and famous author of a thousand-plus scientific articles, noted that there are at least 12 climate variables — changes in seasonal solar irration, energy flows between the air and land, etc. — that people should look into and study before declaring with certainty that there is indeed a climate emergency.

Governments, upon the prodding of the UN, make policies bases on wrong “climate crisis” scenario of “unprecedented, unequivocal global warming.”

Thus in the Philippines, we enacted the Renewables Energy (RE) Act of 2008 (RA 9513) which gives plenty of special privileges to solar/wind/biomass/hydro power producers, like the feed in tariff (FIT) or guaranteed price for 20 years, to “help save the planet.” The higher oil, diesel, coal taxes under the TRAIN law (RA 10963) is also done along this goal.

There were two reports in BusinessWorld in July 29 related to this:

Many East Asian economies hardly pay attention to injecting more solar/wind into their national electricity grid. In particular, Indonesia, Malaysia, South Korea, Singapore, Vietnam, Taiwan, and Hong Kong have a solar and wind share of only 2% or lower of their total electricity generation. And these economies generally have high per capita income (see table). 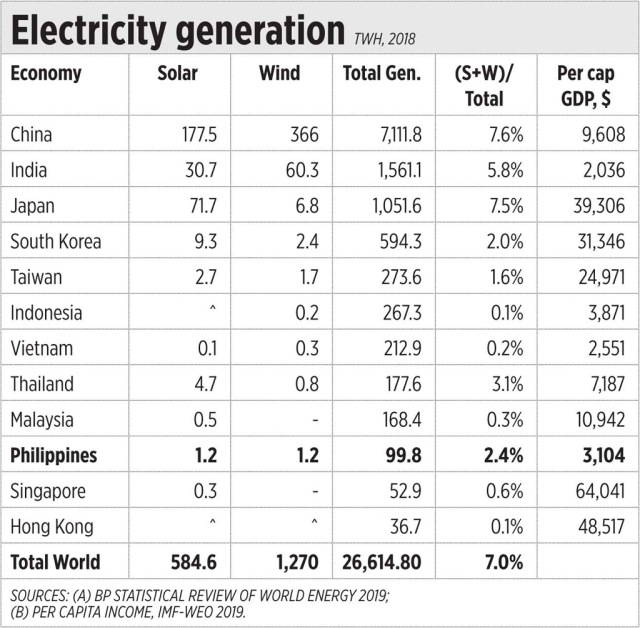 We should not further expand bureaucracies but instead, expand conventional energy sources to significantly expand our electricity production, which will help bring down energy prices and make electricity supply become more stable.